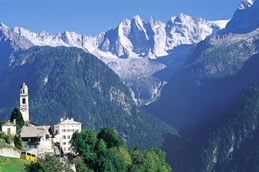 Hiking in the Alps

The Via Alpina is one of the longest and most spectacular hiking trails in all of Europe and perhaps the entire world. Alpine trekking draws millions of hikers from all over the world each year to traverse ancient European roads and footpaths from glacier-tipped mountain peaks down deep valleys to meadows covered in wildflowers. The Via Alpina is made up of five color-coded sub-sections: the Violet (also known as Purple), Yellow, Green, Blue, and Red trails; covering the whole of the Alps mountain range and more. All together Via Alpina spans approximately 5,000 kilometers or about 3,100 miles and has 342 individually numbered and posted stages. It stretches across no less than seven different countries along the way, starting in Slovenia near Trieste, crossing through Austria, Germany, Liechtenstein, Switzerland, Italy, and France; and finally ending near the world-famous beaches of Monaco.

How the Via Alpina Started

The Via Alpina was first conceived of in 2000 by an eight-member council of private and public stakeholders called the “Alpine Convention” which oversees the entire trail and its maintenance. The Alpine Convention consists of one member from each of the eight nations crossed by the trail and received major funding from the European Union. Work began on signage and trail connections in 2002. The completely finished trail was finally unveiled in 2005, making the Via Alpina one of the newest multi-national hiking trails in the world and Europe’s first trans-Alps trail.

Goals of the Via Alpina 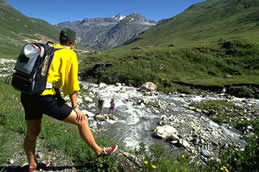 Hiking in the Alps

One of the main goals of the Alpine Convention in creating the Via Alpina trail system was to help preserve the distinct cultures and character of the Alps mountain range as it faces increasing threat from global warming and other environmental dangers. The Via Alpina’s main artery, the Red Trail, crosses national borders 44 times alone. The Alps are steeped in some of the richest history in the world from Hannibal famously crossing the Alps on his war elephants in 218 BC to Lance Armstrong doing it on just a bicycle (yet again) this year. You can have a chance to walk in some of the same footsteps as Roman Emperors and ancient explorers, and have a yodel from the top of the Swiss Alps along the way. Besides encountering some of the most famous peaks in the world, like the nearly 16,000 foot-tall Mont Blanc on the border of France and Italy, Via Alpina hikers can discover fascinating tiny villages in Slovenia, hidden farms in France, ancient rustic vineyards and religious patron-saint festivals in Italy.

Why You Should Walk the Via Alpina

This unparalleled cultural and natural heritage of the Alps begs to be explored on foot to be fully appreciated. The Alps region is both Europe’s largest wilderness area and home to almost 14 million people with abundant traditions of cultural exchange. The Via Alpina traveler has hundreds of opportunities to not just appreciate natural wilderness but also to dine on local delicacies in civilization like famous Swiss fondue, French delicacies, and German pilsners. One can rough it and sleep outdoors or take advantage of extremely comfortable village lodges along the way.

Although one should be in healthy physical condition to be able to hike at altitude, the majority of the paths of the Via Alpina are not too technically challenging for the average hiker, especially if you avoid the snowstorms of the winter months. Although Via Alpina is a very well-supported trail, you should always prepare yourself with knowledge and the proper equipment. Via Alpina presents some of the most stunning views in the world – so be sure to bring a camera with a lot of capacity!